As the membership organization for business, we promote our community’s economic vitality and quality of life through leadership development, advocacy, facilitation and education.

A proud community leader, the Napa Chamber of Commerce is accountable to a diverse membership and works tirelessly to provide an extensive network of resources for businesses of all size and scale.

A robust and active economy is essential for business growth, and we empower members with the tools to cultivate their own success, thereby benefitting the community as a whole. Connection – whether to the community, customer or political advocate – allows business to thrive.

As a relevant leader in our community to improve our social and economic environment.

Membership in the Napa Chamber is an investment in your business’ success.

With a population of just over 3,000 in September of 1889, the Northern California town named Napa had little to attract much outside attention. Surrounded by farm fields, the tiny community possessed dirty streets which were dusty in dry weather and very muddy in wet weather. Wooden sidewalks were generally uneven and posed a challenge to those intent upon walking on them.

Other than family-owned businesses, there were few job opportunities. Even some basic necessities of the time were not to be found in the community. George M. Francis, owner, publisher and editor of the Napa Register for 19 years at the time, decided enough was enough, and having been appointed Napa postmaster by directive of President Chester Arthur, Francis had sufficient contact with his fellow townspeople to realize there was growing discontent with conditions.

Thus, Francis called a public meeting at the local courthouse on September 30, 1889. Much to the delight of all concerned. 80 Napans came to the gathering. E.D. Beard, local merchant was elected temporary chairman and as a first item of business appointed Frances, Robert Corlett A.W. Norton, the Reverent Richard Wylie and Henry Brown to serve as a committee which would formulate a plan for the organization.

After the committee adjourned to another room to ponder its mission, the remainder of those assembled for the meeting agreed with a motion that officers be elected to serve for the next 12 months. Named by acclamation were Beard, president; A.E. Holden, vice-president, L.E. Norton, secretary; C.R. Gritman, treasurer, Henry Brown, C.B. Seeley, A.W. Norton and W. J. McCullum, executive committee. 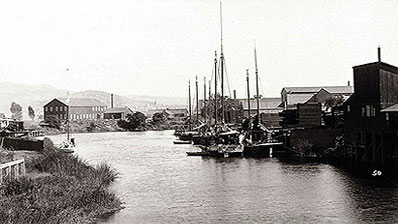 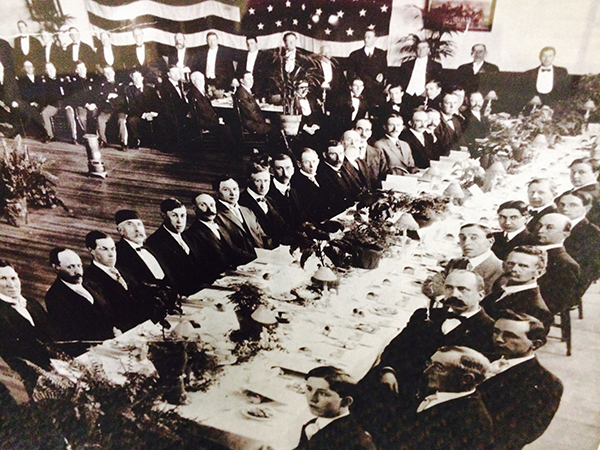 Before Beard adjourned the session, it was agreed that the next meeting would concentrate on the “reorganization of our city government” as well as considering recommendations for the special committee deliberation at the time in the adjoining room.

October 7 proved to be a meaningful occasion for those attending the next meeting – and that included most from the initial gathering.

By almost unanimous vote it was agreed that the new organization would be named the Napa Improvement Society.

A committee was appointed to speed the process required to have Napa streets sprinkled and a way to finance the effort. Recommendations of the special committee that there be some reorganization of city government were approved and a new group as named to formulate a plan to accomplish the aim without legislative approval.

At a meeting November the first, bills were presented for payment. There was immediate approval for the expenditure of $2.55 to cover the expenses.

At the same time, a plan was adopted for sprinkling the streets the following summer and a special subcommittee was formed to study means of improving the “heavily traveled” roads leading to the local cemetery and the Napa’s principal source of employment, the state-financed asylum just south of town.

By December 2, Improvement society leaders were calling on the county supervisors to adopt a plan of action for needed area road improvements; three months later, at an estimated cost of $2,500, such a plan was authorized. At that time, just about everyone in positions of authority recognized that the Improvement Society was ”Napa’s Voice.”

By 1896 it was decided that greater emphasis should be placed on the local economy, and with that decision came a change of name from Improvement Society to the Napa Board of Trade, Eight years later leaders thought it more realistic to call their organization the Napa Chamber of Commerce and that designation became official January 25, 1904.

The adopted bylaws declared the primary objective of the Napa Chamber of Commerce would be “to bring the people of Napa together as an organization that as such may better protect the individual and collective interests.” The document specified:

“For an organized effort to promote the best interests of the City and County of Napa commercially (the Chamber) by inducing immigration and encouraging new manufacturing industries, increased transportation facilities and giving moral support and encouragement to the several departments of the city and county governments whereby extensions and improvements shall be encouraged…”

Bylaws declared the at “any person of good moral character can become a member of the organization.” There would be no “joining fee,” but once members were approved, they would be assessed monthly dues of fifty cents. Six standing committees would operate within the chamber: Manufacturing, Immigration, Waterways & Transportation, Streets & Highways, Visitor & Reception, and Advertising.

At the turn of the century Napa’s first major effort to attract tourists was launched in Ogden, Utah – railway center of the west – where several thousand leaflets were distributed to passengers boarding trains for San Francisco.

Much has been written about the earthquake of 1906 which resulted in the deaths of 503 San Francisco area residents, injuries to thousands of others and more than $350 million in property damage. Yet, the quake and subsequent tremors recorded April 18 and 19 were also felt in the Napa Valley.

Although there were no deaths and only a few minor injuries recorded within Napa County, there was extensive – if not costly – property damage in the Napa Valley.

But, despite the scars from the quake locally, Napans rallied to provide assistance to those most in need – the people of San Francisco as well as friends and relatives in Santa Rosa and Sonoma County. Chamber of Commerce President I.J. Evans had no difficulty when he issued a call to the Napa business community and residents to provide accommodation for earthquake victims and needed supplies for others where damage was most severe. About 200 San Franciscans were housed in private homes in Napa.

The Napa Chamber of Commerce collection points received large quantities of food, blankets and clothing or shipment to San Francisco and Santa Rosa. Some Napans who happened to be in San Francisco at the time of the earthquake, provided eyewitness accounts of the disaster to local newspapers. Napans in San Francisco also helped arouse public concern regarding the earthquake. Attracting major attention locally was earthquake damage in the central business district of Napa, particularly a badly damaged outer wall at the Migliavacca Building and structural damage at the Uncle Sam Wine Cellar on Main Street. Major cracks developed in the caves at the Beringer Winery at St. Helena.

The Great Depression of the 1930’s had a severe impact on Napa just as was the situation in hundreds of other California communities. The Napa Chamber of Commerce joined with local church and welfare groups to lessen the impact of the economic crisis locally. But, the Chamber had problems of its own.In June 1, 1939, directors issued a statement noting their concern over the loss of memberships because of business failures in the community. “It is hard to get new members because business conditions are not good, collections are slow and businesses cannot see the way to shoulder any additional expense,” a Chamber release stated. In order to help customers remain in business, the Rough Rider clothing company in Napa extended generous amounts of credit to its Bay Area customers. Many acknowledged that they were saved from economic disaster by the gesture.

Even before the United States entered World War II on December of 1941 the Napa Chamber of Commerce had formulated a program to support the nation’s armed forces and defense efforts. Napans were asked to make living space available to workers arriving from across the nation to work at the expanding Mare Island Naval Shipyard and Benicia Arsenal.

In January of 1942 the Chamber gathered local donations for British (War) Relief and directors authorized the use of Napa Chamber of Commerce premises for the entertainment of American soldiers then temporarily camped at he the Nap fairgrounds. Chamber directors were asked to help locate and emergency location for an auxiliary field in conjunction with Alameda Naval Airbase. Yountville had been suggested as a possible site.

In December a New Years Eve dance was planned by the local VFW auxiliary at the Napa Chamber of Commerce hall for American servicemen en route to the war zones. Large numbers of Chamber members and their families left the community for active duty in the armed forces. The Chamber cooperated with the National authorities to help locate sites for federal housing projects to accommodate the ever increasing number deference industry workers moving to the Napa-Vallejo area.

Peter Gasser, Chamber president during the war years, frequently presented checks and other forms of assistance to the USO, American Red Cross and other agencies supporting the war effort.

Napa Chamber of Commerce personnel helped generate cards, letters and packages form local townspeople for servicemen overseas. Napa families were encouraged to “dial a sailor” and other military personnel assigned to the area for home hospitality and meals.